Read the Qur’aan, for it will come on the Day of Resurrection and intercede for its companions 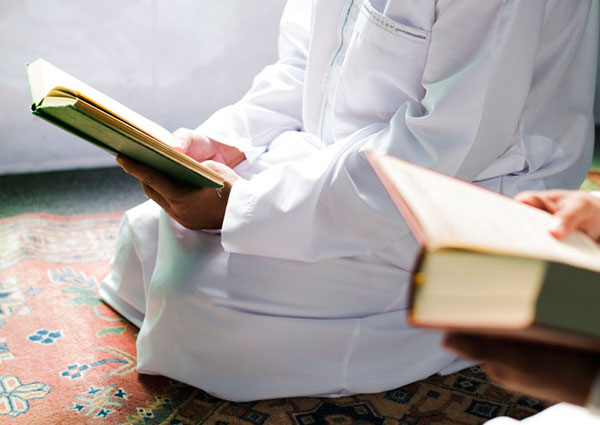 It was narrated that Abu Umaamah al-Baahili (may Allaah be pleased with him) said: I heard the Messenger of Allaah (peace and blessings of Allaah be upon him) say: “Read the Qur’aan, for it will come on the Day of Resurrection and intercede for its companions…” Narrated by Muslim, 804.

This hadeeth is indicative of the virtue of reading the Qur’aan, and the great reward that it brings, and tells us that it will intercede for its companions on the Day of Resurrection for them to enter Paradise.

It was narrated that al-Nawaas ibn Sam’aan (may Allaah be pleased with him) said: I heard the Prophet(peace and blessings of Allaah be upon him) say: “The Qur’aan will be brought on the Day of Resurrection, with its people – those who used to used to act in accordance with it – preceded by Soorat al-Baqarah and Aal ‘Imraan.” The Messenger of Allaah (peace and blessings of Allaah be upon him) likened them to three things, which I did not forget afterwards. He (the Prophet) likened them to two clouds or twoblack canopies with light between them, or like two flocks of birds in ranks pleading for one who recitedthem.”

The fasting person should recite Qur’aan a great deal during these blessed days and nights, for reading Qur’aan during Ramadaan is more special than in other months.

He should make the most of his time in the blessed month in which Allaah revealed the Qur’aan.

Reading Qur’aan in the nights of Ramadaan is something special, for the night is free of distractions and it is easier to focus the mind, thus a person can focus on what he is reading and try to understand it. And Allaah is the One Whose help we seek.

It was proven that Jibreel (peace be upon him) used to meet with the Prophet (peace and blessings of Allaah be upon him) every night in Ramadaan and study the Qur’aan with him. If dhikr were superior to the Qur’aan or equal to it, they would have recited dhikr all the time or some of the time during their frequent meetings. This hadeeth shows us that it is mustahabb to study the Qur’aan in Ramadaan and to gather to do so, and to practise reciting Qur’aan in front of one who has more knowledge of it.

The righteous salaf of this ummah used to recite Qur’aan a great deal during Ramadaan. When they fasted they would sit in the mosques and say, Let us guard our fast and not backbite about anyone. They would recite Qur’aan in prayer and at other times.

‘Uthmaan (may Allaah be pleased with him) used to read the entire Qur’aan once a day.

Some of the salaf used to complete it when praying qiyaam every three nights.

Some of them used to complete it every seven nights, and some every ten.

In Ramadaan al-Shaafa’i used to complete it sixty times at times other than prayer.

Al-Aswad used to read the whole Qur’aan every two nights in Ramadaan.

Qutaadah used to complete the Qur’aan every seven days all the time, and in Ramadaan every three days, and in the last ten days every night.

These reports about the salaf are well known.

Al-Haafiz Ibn Rajab (may Allaah have mercy on him) said: It was narrated that it is not allowed to read the Qur’aan in less than three days as a habit, but in times of virtue, such as the month of Ramadaan – especially during the nights in which Laylat al-Qadr is sought, or in places of virtue such as Makkah for non-residents who go there, it is mustahabb to read Qur’aan a great deal, seeking to make the most of the virtue of that time or place. This is the view of Ahmad, Ishaaq and other imams, and this is indicated by the actions of others as stated above.

The one who reads Qur’aan must observe the proper etiquette, including having a sincere intention towards Allaah.

He should read in a state of purity (i.e., with wudoo’)

He should use miswaak.

He should think about what he is reading and not rush, rather he should read at a measured pace, and focus on the meanings, because this helps the reader to pronounce the letters correctly and ponder the meanings, and focus with proper humility. Allaah says (interpretation of the meaning):

“(This is) a Book (the Qur’aan) which We have sent down to you, full of blessings, that they may ponder over its Verses, and that men of understanding may remember”

The etiquette of reading includes not breaking off to speak to anyone. Many people sit to read with others next to them, and they often break off to speak to their neighbour. This is not appropriate because it is turning away from reading unnecessarily.

The one who is reading should act in accordance with the Qur’aan, regard as halaal that which it permits and as haraam that which it forbids, so that the Qur’aan will testify for him on the Day of Resurrection and will intercede for him to enter Paradise.

Start learning the Holy Quran with Tajeed from qualified Qari and register today for our online Quran learning classes.

Related posts
Virtues of Ramadan
May 10, 2019
Quran Online Classes from Pakistani Tutor at Your Home
April 26, 2019
Freelance Quran Tutor Available for UK, USA, Australia, Canada, Sweden
March 7, 2019
Except for fasting, for it is for Me and I shall reward for it…
March 1, 2019
Leave Comment